The Happy Hour #541: Compassion Stories from the Dominican Republic 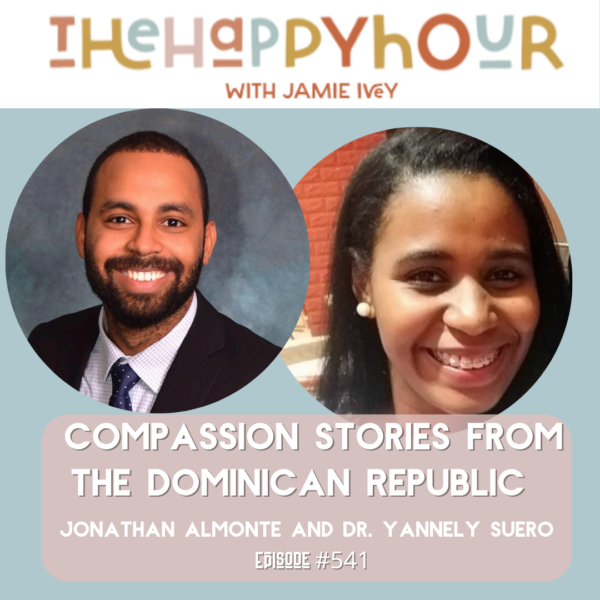 I love any time I get to sit down with my friend Jonathan and talk about Compassion International, so today is automatically up there in my list of favorites. After my conversation with Jonathan, stick around for Angie Elkins’ conversation on this episode with Dr. Yannely Suero, another former Compassion child who is now a pediatrician!

Compassion International’s mission is to release children from poverty in Jesus’ name. During the episode, Jonathan and I talk about what Compassion does for children in the Dominican Republic, what happens when we say ‘yes’ to sponsoring a child, and how families and generations are changed forever through Compassion sponsorships.

Jonathan shares his amazing story about what Compassion did for him! His sponsor, Jamie from Michigan, would write letters to him saying simple things like, “I’m thankful for you and I’m praying for you,” and that helped him to feel as though God had placed people around him for love and support, even thousands of miles away. Now Jonathan’s family – because of his sponsor Jamie’s $38 monthly gift – live a completely different life. He and his children are not enslaved to poverty, because of Compassion. Jonathan says Compassion is more than people writing a check: it’s about people truly joining in God’s mission. As a sponsor, I totally agree with Jonathan! My family and I sponsor four kids in Kenya, Haiti, Peru and Mexico City – it has not only been life changing for each of them but for my family as well.

The second part of today’s episode is a conversation between Ivey Media’s own Angie Elkins and Yannely, another former Compassion child. Yannely also had an incredible sponsor, Dorothy, who encouraged her greatly, even prophesying that Yannely could be an amazing doctor – and now Yannely is a pediatrician!

If you are not already sponsoring a child, I hope that you will pray about taking the next step to help another child who is waiting for sponsorship to change their life too. You never know what your $38 dollars can do for a child and for an entire generation.