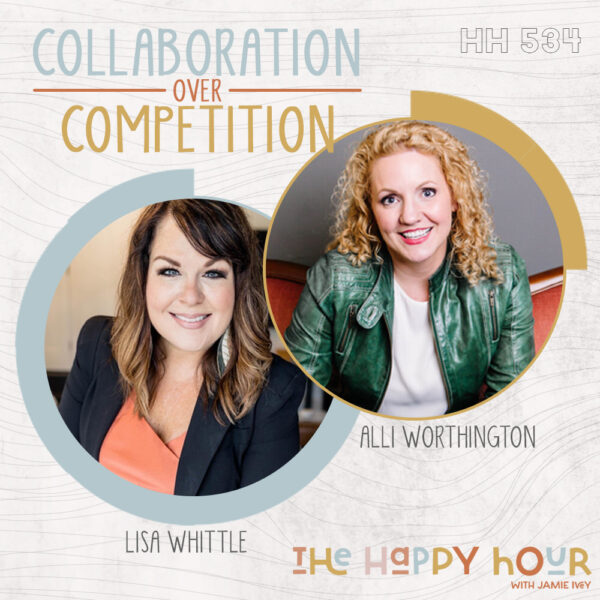 I’m sad to say that we’re wrapping up our Collaboration Over Competition series, but we are finishing strong! My guests today are two of my dear friends, Lisa Whittle and Alli Worthington, founders of the organization Called Creatives. Called Creatives is a private coaching community with hands-on training for those who want to write and speak with influence and impact. With a growing membership base of more than 500, Called Creatives provides opportunities for mastermind groups, publishing support, private events, and so much more!

In today’s episode, we talk about how Alli and Lisa meld their gifts together, how they work to overcome any feelings of jealousy, and what it looks like for them to collaborate with one another. I asked Lisa and Alli how the idea for Called Creatives came to be, and let me just say, I wish I had a personality like Alli. Alli decided she wanted to do a membership site for creative women who wanted to write and speak because nothing like it existed for women in that area. With no fear or hesitation, Alli immediately got started but she didn’t want to do it alone. Alli prayed about the idea, and less than five minutes later, the Lord spoke very clearly to her: “It’s Lisa”.

Lisa, on the other hand, was a bit more hesitant about collaborating with anyone because she said she really struggles to trust others. In fact, Lisa told Alli that she did not trust her when Alli first asked! Lisa says although she was afraid, she knew she just needed to take one step. Lisa reminds us that initial fear and not feeling “all in” in the early stages of something doesn’t mean we shouldn’t just start. See how it goes! Do it afraid.

Together, Alli and Lisa are thriving as teammates. Within their community of 500 members, more than THIRTY books will be published by the end of this year! That’s what intentionally choosing to collaborate can do!

I hope you have enjoyed this series and that you have a new perspective on the decision to choose collaboration over competition, wherever in your life competition may start to creep in.